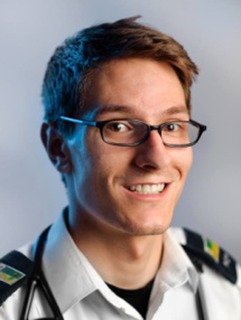 SPYKER, Jacobus (Jack) James - Passed away suddenly in North Battleford, Saskatchewan on Tuesday, March 17, 2015. Jack was born March 6, 1988 in Welland to Jack and Dorothy (Rogers) Spyker. He attended Ross Elementary School then graduated from Centennial High School in Welland. As a youth he was a member of the Welland Air Cadets where he learned leadership and survival skills. When it came to adventure, for Jack the sky was the limit. He enjoyed roughing it in the woods, hiking, rappelling and even sky diving. Jack had an artistic side which he expressed through his amazing photography. True to his caring nature, Jack went on to become a dedicated, well educated Paramedic who also helped new trainees 'learn the ropes'. His career took him to Saskatchewan where he worked for WPD Ambulance, made new friends, and met the love of his life Jillian Jones. Besides his parents, Jack leaves behind his loving sister Britny Spyker. He is survived by grandparents, James Rogers and Grace Spyker along with many other family members, friends and co-workers. He is predeceased by his grandparents Barbara Rogers and Jack Spyker Sr. Cremation has taken place and at this time it is the desire of Jack's family that you join them in a celebration of his life, to be held at Riverstone Event Centre at 414 River Road, Welland on Wednesday, April 1, 2015 at 6:00 pm. In lieu of flowers please consider a donation to a trust fund set up at www.gofundme.com/q8cncg by a close friend of Jack's to help the Spyker family. "Your soul cried tears and you didn't know why…In seeking the answers, you flew to the sky."