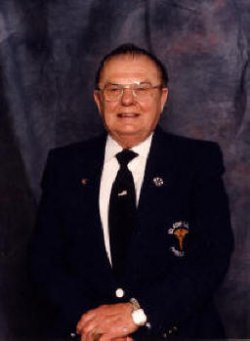 He was born and raised in the Blaine Lake area. He learned about business at an early age. As a young boy he helped his father selling fish and other products door to door. He served in the Canadian Armed Forces for Four and a half years. In 1943, Mike married Ida Anderson of Canwood, Sk in Nanamio BC. The couple moved to Blaine Lake and established the CNR Cafe. Besides the restaurant, an appliance store was opened. In 1957 Blaine Lake Ambulance was established. Seeing a community need he slowly expanded his operation to Spiritwood, Prince Albert and Saskatoon. Mike served as a council and board of trade member. He was Mayor of Blaine Lake for several terms, He was also a director of the Hafford Hospital Board and the Parkland Health District. Mike also served as a Justice of the Peace for many years.

Mike spent 64 years as the barber in Blaine Lake. Mike helped the Blaine Lake area with helping to acquire the Petrofka Bridge. Mike and Ida raised a family, 5 of whom are involved in the "family business ". After Ida's death Mike met Mary Billay of Meath Park, his loving companion and partner until his passing. In 1999 Mike received the Governor Generals Medal for Exemplary Service in EMS. In addition Mike received many other awards from the Province of Saskatchewan. Most recently, on Thursday October 9, 2008, Mike received a national award from the EMS Chiefs of Canada, the Presidents Award for Leadership. Dad has taught us many things in life. Words that describe him are perseverance, humility, a very deep sense of pride in family, both personal and professional. Dad had a wonderful sense of humor.

He was a leader and a man of vision. We are very proud of his many achievements and we are especially proud of his kind and generous nature as we know "Dad always Bought Lunch! " The family wishes to sincerely thank the Doctors, Nurses and Staff of Saskatoon City Hospital and Royal University Hospital for their compassionate care. Prayer services will be held Thursday evening at 7:00 pm. Mass of Christian Burial will be celebrated on Friday, October 17, 2008 at 10:30 am. Both services will take place at Holy Spirit Parrish 114 Kingsmere Place in Saskatoon. In Lieu of flowers, donations may be made to the Blaine Lake Ukrainian Catholic Church. Arrangements are entrusted to the Beaulac Funeral home of Spiritwood. Long time family friends.

YOU WILL BE MISSED DEARLY...BUT NEVER FORGOTTEN

View the embedded image gallery online at:
https://pscs.ca/about-semsa/in-memoriam/item/59-michael-dutchak#sigProIde5442e3b0e
back to top